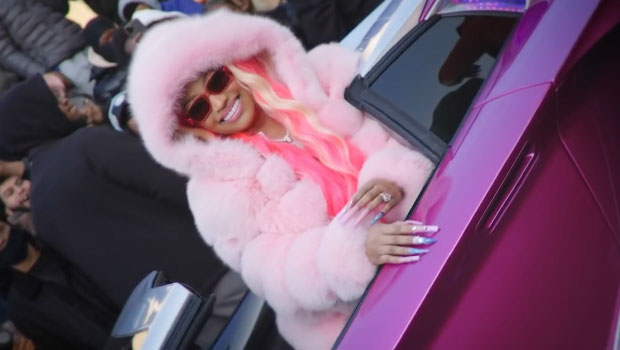 Nicki Minaj is a foul Barbie in her new music video! The rapper, who was born within the Port of Spain and grew up in Queens, collaborated along with her fellow New Yorker, Fivio Foreign, for his or her newest single, “We Go Up.” Nicki goes exhausting within the opening line from the beginning, prompting these from the Big Apple to “stand the f— up” as she and Fivio breeze across the metropolis in colourful Ferraris and Lamborghinis.

The video, which dropped April 19, reveals Nicki and Fivio dripped out in stellar matches as they rap in entrance of actual New Yorkers from the neighborhood. While Fivio sported head-to-toe black clothes plus a big silver chain and bucket hat, Nicki was decked out in her signature pink colors, carrying a pink-and-white-printed jumpsuit with knee-high white boots. She paired the look with an lovely bubblegum pink fur coat and matched with lengthy, scorching pink wavy hair.

“Uh, I know they teabaggin’, b—-es is testy/ Get you a vacuum,” Nicki raps on the opening verse on the observe, which has since gone viral on TikTookay. “B—-es is messy / Let’s see, after all of that surgery, you are still ugly / Now that is what gets me.”

The newest observe comes after “Blick Blick” with Coi Leray arrived final week plus “Do We Have a Problem” and “Bussin,” which each featured Lil Baby. The “Do We Have a Problem” video was additionally epic, that includes a dramatic opener the place Nicki was arrange as an spy attempting to dig up filth on a mob outfit.

While making an appearance on James Corden‘s The Late Late Show back in February, Nicki hinted at the upcoming album, which marks the first full studio-length album since 2018’s Queen.